Written by Dimitris Athanasiadis
Updated over a week ago

To add a new Currency in Megaventory, first you need to open your Currencies list by clicking on the gear icon and selecting CURRENCIES from the menu on the right: 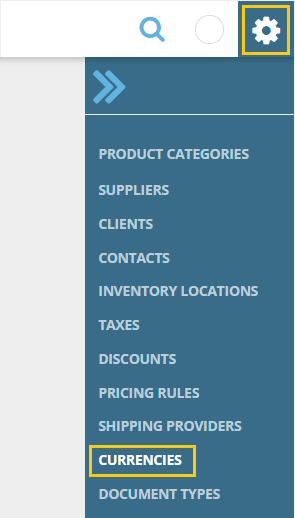 A currency symbol is a graphic symbol used as shorthand for a currency’s name. For example, $ or €. If such a symbol does not exist, users should add the three letter code of the currency according to the ISO 4217 specifications (for example, GBP, MXN, etc.). A Show in Reports checkbox flag denotes whether the Currency added will be available in Reports.

Did this answer your question?